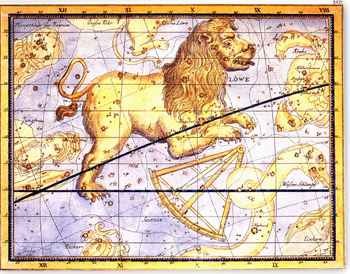 Leo is perhaps as ancient a constellation as Taurus the Bull, and was associated with kings of Mesopotamian city states in the third millenium B.C. Regulus obtained much of its significance as a prominent marker of the yearly path of the Sun, lying almost on the ecliptic. The Sun now passes through Leo in late August.

The thick, tough skin of the fiercest lion in the world became the trademark of Hercules after the hero strangled the lion to complete his first test.

East of the Gemini twins lies Leo the Lion. Find the bowl of the Big Dipper. From the two stars on the handle-side, trace a line back to Leo and its bright star Regulus.

His flank is a triangle of stars farther east.

In mid-November every year, a shower of meteors originates from the sickle area of Leo. Meteors have nothing to do with meteorites. Meteorites are rocks that land from space. Meteors or "shooting stars" are the flaming trails of dust and debris left in the wake of a comet, burning up as they enter the Earth's atmosphere. The Leonid meteor shower, November 17, is due to dust thrown off from the parent comet, Tempel-Tuttle. Great meteor storms were associated with the Leonid meteor shower in 902 AD, "the year of the stars," and in 1833.

One of the Ten Commandments of astronomers is never to build up false expectations for a meteor shower. Will the Leonid meteor shower put on a dramatic show this year? No. Most of the night nothing will happen, except your fingers and toes may grow cold. If the sky is clear, you may see 8 to 10 meteors per hour. If you are lucky, they may appear green or blue as well as white, and leave long-enduring trails.

Yet the Leonids were dazzling in 1833. Astronomer Agnes Clerke described that shower as follows: On the night of November 12-13, 1833, a tempest of falling stars broke over the Earth.... The sky was scored in every direction with shining tracks and illuminated with majestic fireballs. At Boston, the frequency of meteors was estimated to be about half that of flakes of snow in an average snowstorm. Their numbers... were quite beyond counting....

Some of the meteors were said to be as bright as streaking full moons. The sudden and awful display prompted fervent prayers of repentance in the belief that the day of judgment was at hand.

A line running through the two stars of the bowl of the Big Dipper on the side nearest the handle points almost directly to two other notable stars. Follow them below the bowl of the Dipper to Regulus, the heart of Leo the Lion.

Leo's mane looks like a backward question mark. Regulus, the "dot" at the bottom of the mark, lies nearly on the ecliptic.

Legend: In the constellation chart above...

The "Sickle," or backward question mark, forms the head and mane of the lion. Regulus is the bottom-dot of the question mark.

What is an Asterism?

Regulus in Latin means royalty (little king), and is the brightest star in Leo, the king of the zodiacal animals. Prior to Copernicus, who gave it its name, it was called Cor Leonis, the heart of the Lion. Regulus is a bluish-white star approximately 85 light years away.

Table of 25 Brightest Stars.
What is apparent stellar magnitude?

What are Galaxies?
Table of Messier Objects.
What is apparent Magnitude?

Discussed in these Shows

©1997 Welcome to the Basic Celestial Phenomena web site. To provide explanations of basic observational astronomy to students, teachers, families, and visitors to planetariums these pages have been written by an ex-OBU Planetarium Director, Kerry Magruder; the OBU Natural Sciences Coordinator, Mike Keas; and some of the students who work in the OBU planetarium.

The source for the logo is not a medieval woodcut!

These web pages may be printed, copied, and distributed for educational use by any non-profit educational group so long as they are not edited or altered in any way, nor distributed for profit, nor repackaged or incorporated into any other medium or product, and so long as full credit is given to Kerry Magruder.

If you find a link that does not work, please tell us which link does not work--and which page you are on. Contact us by Email with general inquiries or suggestions. Thank you.

Page made with HyperNote Kerry Magruder, Home page or Email