Shape of the Milky way Galaxy

What shape is the Milky Way galaxy? Is it spherical, ringed, or like a star-wheel?

The Milky Way galaxy is a starwheel about 100 light-years across. Instead of spokes, it has spiral arms. As explained in Starstruck Tonight:

Below the central star of Cygnus are clumps of stars that form the Cygnus Arm of the Milky Way galaxy. Our Sun is located on the inside edge of the Cygnus Arm, about two-thirds of the way out from the galactic center. As we look toward the body of the swan, in the bright section of the Milky Way between Deneb and Albireo, we are sighting along the very arm in which we are placed. Behind us, this spiralling arm contains the stars of Orion, and eventually reaches the outskirts of the galaxy. Before us, as we gaze toward our neighboring stars in Cygnus, the arm spirals down toward the center of the galaxy.

In a very real sense, then, our lives are closely linked with the stars of Cygnus. As Francis Thompson wrote:

All things by immortal power,
Near or far,
Hiddenly
To each other linked are,
That thou canst not stir a flower
Without the troubling of a star.

As explained in Starstruck Tonight:

It was not easy for astronomers to understand what a galaxy looks like. Early viewers of the Andromeda galaxy did not imagine that it was a star system like our own. Christian Huygens (HOY-gens) thought it was a hole in the heavens through which we might peer into the luminous regions beyond. Edmond Halley (rhymes with "valley") agreed, suggesting that the light came from a region of perpetual day, a shining ether filled with the light that originated on the first day of creation, before the formation of the Sun, Moon and stars.

In the eighteenth century Thomas Wright argued that the Milky Way is caused by a large-scale grouping of stars, and that the various cloudy patches in the sky might be many other such star groupings in the universe. He tried to understand how the stars of different galaxies might be arranged, and how they would appear if we could see them from the outside.

Perhaps galaxies were shaped like the rings of Saturn? Or formed like giant bubbles? We then would see many stars while looking along the edge of our bubble, but fewer stars while looking outward or toward the center. Or perhaps galaxies might be caused by giant spheres of stars nested one within another? According to Wright, each star system contained a supernatural "divine center," around which the system revolved, which prevented it from collapsing inward under the force of gravitational attraction.

Wright called these sketches "finite views of infinity" and "partial views of immensity." For Thomas Wright, one thing was sure: the greatness of the systems of stars was a physical expression of the majesty and omnipotence of the divine Creator. 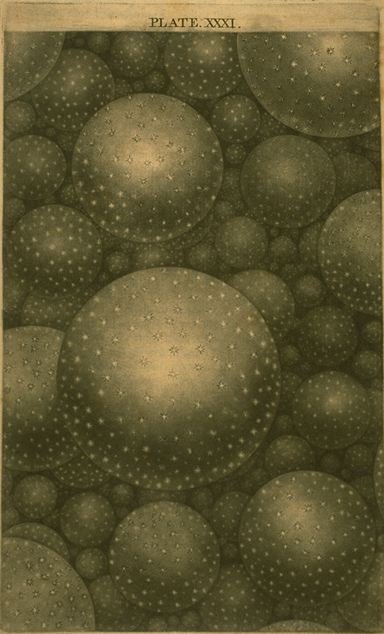