Are galaxies relatively rare in the known universe?

As explained in Starstruck Tonight:

If we know what to look for, we can find many galaxies in the sky, far more distant than Andromeda. In the area of Ursa Major near the Big Dipper are two remarkable galaxies, both of which are too far away to view without a telescope.

M81 is a classic spiral galaxy we see almost face-on, about the same size as the Milky Way, beautiful in its graceful repose.

In contrast, M82, seen edge-on, may have experienced a titanic explosion. No one knows for sure, but M81 and M82 are wrapped in a common envelope of dust. Perhaps the passing of M81, which is almost ten times larger, has left the smaller M82 disrupted in its wake.

For ten days in December of 1995 the Hubble Space Telescope collected light from a blank spot of sky, devoid of naked-eye stars, just above the bowl of the Big Dipper. This project, known as the Hubble Deep Field survey, covered an area of the sky about one-twenty-fourth of a degree wide, no larger than a grain of sand held at arm's length.

Within this tiny spot of sky, beyond the reach of earth-bound telescopes, were brought into view over fifteen-hundred galaxies, four billion times fainter than the limits of human vision. This snapshot of the Big Bang's galactic baby boom discloses galaxies in an astonishing plenitude and variety. There are spirals and ellipticals and bar-shaped galaxies, the same familiar galactic types seen in galaxies nearer to us. Many are colliding, some interacting or exchanging their material. Many are seen edge-on; many face-on; and many from every angle in between. Their stars are colored blue, yellow, and orange. Their light has travelled to us across eons of time from the remotest parts of the known universe. 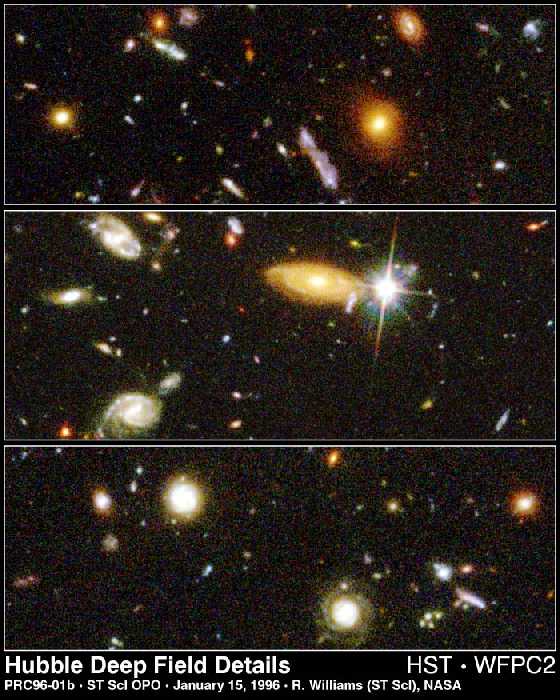 We are encircled by galaxies upon galaxies and the infinite immensities of uncharted skies. With this new window into the heavens our hearts stir, echoing the words of Ptolemy, the great astronomer of antiquity:

I know that I am mortal and living but a day.
Yet when I search for the numerous turning spirals of the stars,
I no longer have my feet on the Earth,
But am beside God himself,
filling myself with divine ambrosia.

The heavens declare the glory of God;
the skies proclaim the work of his hands.
Day after day they pour forth speech;
night after night they display knowledge.
There is no speech or language
where their voice is not heard.
Their music goes out into all the earth,
their words to the ends of the world.


O Lord, our Lord,
how majestic is your name in all the earth!
You have set your glory above the heavens.
When I consider your heavens,
the work of your fingers,
the moon and the stars,
which you have set in place,
what is man that you are mindful of him,
the son of man that you care for him?


To the Hebrews, the greatness of the heavens taught not of God's remoteness, but of the power and glory by which his presence may affect our lives: